gnums : a stack based calculator

gnums is a graphical calculator that uses postfix notation. 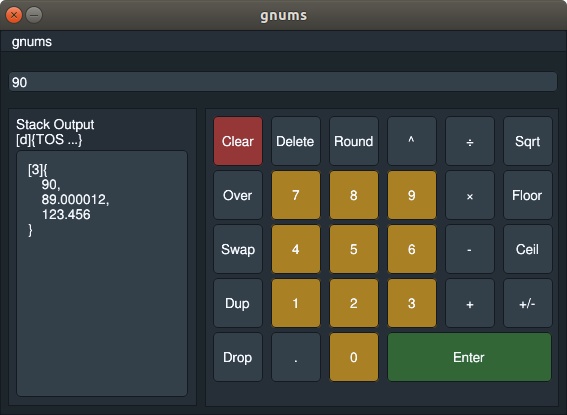 A Go compiler with a version >= 1.16 is required to build gnums.

gnums uses the giu toolkit for golang gui development. The following are all requirements of said toolkit. You can reference their repo for further information.

On OSX you will need to run the following:

On Windows you will need to install mingw.

On Debian (and derivatives) Linux you will need the following:

Other linux systems as well as BSD are not officially supported, but may still work with equivalent packages installed.

I recommend using the program `upx` to compress the executable. This will result in a significantly reduced filesize with no reduced functionality. This is an optional dependency and does not need to be installed to complete the build.

Most package managers should have some version or other of upx available. Homebrew and apt both have it and it is widely supported for many platforms.

Now that you have your dependencies sorted you can go a few different directions. The first would be do use the makefile:

On linux this will also install a desktop entry and icon. On OSX it will install to /usr/local/bin.

For windows the following is recommended:

If you are using OSX or Linux and prefer to not use the Makefile (or it gave you trouble), you can try (eliminating the upx portion if you are not using upx):

Both the windows build step and the non-make build step for OSX/Linux builds the executable in the local folder. You will likely want to copy it somewhere on your $PATH.

If you have used a stack based reverse polish notation calculator before it should mostly make sense. Enter a number and press enter to add it to the top of the stack. Press opperators to have them operate on the stack. If a stack overflow or underflow is encountered the stack will be reset and all calculations reset to 0.

gnums is based on the calculator core of my other program `nums`. The operators function in the same way.

gnums has a number of keyboard shortcuts available. At present, they are not configurable beyond editing the source code itself.